What’s this all about?

YouTube’s top earner for 2020 was just nine years old. Yet, he has amassed a following many times larger than the populations of some small countries. While YouTube is known for focusing on independent content creators making videos about gaming, beauty, music and movies, the finance niche is well and truly active. Indeed, there are many channels creating content for those in their teens and twenties, offering guidance through a mix of anecdotal information, storytelling, opinion and knowledge-sharing.

Read on if you:

A recent analysis by enterprise SEO company Terakeet on the Google market share report for personal finance had some interesting findings. The company analysed a select group of 501 high-value, non-branded, personal finance terms, which account for over 6 million monthly Google searches.

The report highlighted one key disconnected link between financial institutions and their customers: much of their content is focused on their services or other lower-funnel considerations. Google, meanwhile, rewards top, middle and lower funnel information. So, if customers search for something like, ‘what is a variable interest rate loan?’, they’re more likely to see results from Investopedia in the top spot than their bank.

But it’s not just on Google that people are searching for information about how to manage their finances. As we saw in our articles in TikTok and Instagram, there’s a larger trend at work in the world of financial social media whereby people, the younger generations in particular, are turning to these websites and apps in search of:

In early 2021, Visual Capitalist listed YouTube as the second most visited website in the world after Google, its parent company. It’s little surprise, then, that there is an incredible breadth of content on this platform which is usually associated with gaming, beauty, music and movies. But, as you’ll see, we found that the finance niche is alive and kicking. In fact, as we write this article, content creators are live now talking about the markets.

YouTube was started by three PayPal employees back in 2005. To get an idea of its exponential growth since then, just consider, the first video ever uploaded now has over 158 million views (and climbing).

Today, over 2 billion logged-in users visit YouTube every month and 500 hours of content is uploaded every minute, making it arguably the port of call for video content on the internet. It’s pretty stark to consider that by comparison, there are 4.66 billion active internet users globally.

One of the enduring aspects of YouTube’s popularity is its focus on independent content creators. The vlogs, tutorials and original series are what differentiates it from streaming services like Netflix. While this is still a prominent feature, there has been a shift towards more commercial content in recent years. It also shifted its algorithm to prefer videos with longer watch times over higher view counts. So viral videos like Charlie Bit My Finger, the bread and butter of early YouTube content, no longer come to prominence. Indeed, most of YouTube’s innovation has been focused on its algorithm unlike platforms like Instagram, which has utilised a copycat strategy to ensure relevancy.

As of January 2021, the most popular YouTube channels ranked by number of subscribers included T-Series, the Indian music record label and film production company, YouTube movies, music and PewDiePie, whose channel has consistently ranked in the number one spot since he started it eleven years ago.

YouTube’s ad revenue in the fourth quarter of 2020 was over $6.8 million in comparison with $4.7 million in the same period in 2019 suggesting that business is booming. 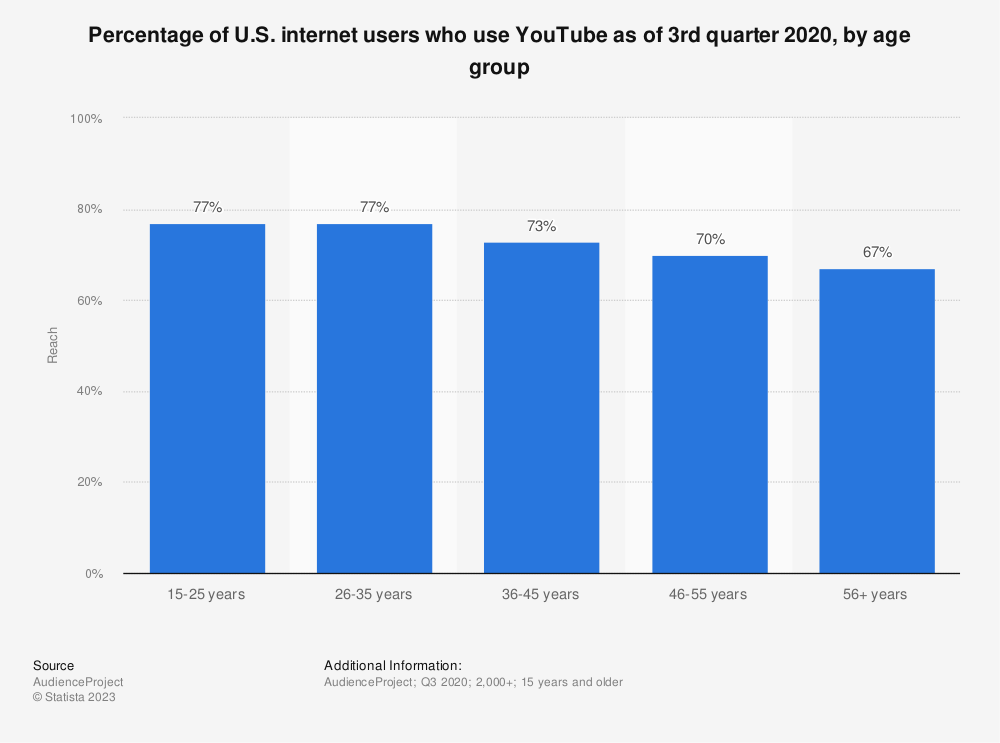 Global Web Index found in its study that YouTube is the top most visited platform by Gen Z and Millennials with 77 and 75 per cent respectively of global internet users outside China visiting it on a daily basis. Gen X and Baby Boomers are found to gravitate towards Facebook primarily.

Details of the top ten earners on the platform for 2020 paint a picture of a) just how young YouTube’s creators and viewers can be and b) the amount of revenue passing through its ecosystem. The highest earner for 2020 was nine-year-old Ryan Kaji whose family storytime videos, science experiments and toy reviews brought in earnings of $29.5 million. In fourth spot were Rhett and Link, two forty-somethings who started their talk show in 2012 and who raked in $20 million for 2020. Beauty star Jeffree Star was in tenth position with total earnings of $15 million.

To give an idea of the size of their followings, Kaji’s channel has 28.9 million subscribers – that’s more than seven times the population of Ireland.

YouTube is a place where people come to learn.

YouTube is a little different to the other social media platforms we’ve explored so far in this series. While relevant content can be found under tags on your homepage, content discovery is predominantly done through its algorithm.

YouTube’s algorithm is not designed to push videos out, rather, it pulls videos in and ranks them based on what users are most likely to watch. Users do signal to the algorithm on how to rank content for them by subscribing to content creators, but primarily, the algorithm focuses on how well a video performs in the context it’s shown in. By comparison, your Instagram feed will show you content based on who you follow and the types of posts you’ve liked historically.

In order to get an idea of how active the finance niche on YouTube is, we turned to Google Trends to see how financial keywords that came up a lot in the form of hashtags on other social media platforms performed over the past 12 months.

‘Finance’ was by far the most searched keyword on YouTube out of the sample we compared it with.

We also compared ‘finance’ (blue) with ‘unboxing’ (red), one of the most popular trends on YouTube associated with the likes of Ryan Kaji and unsurprisingly, the finance keyword was searched for a lot less.

It’s worth noting though that this is different depending on the country. For example, in Hong Kong, ‘finance’ is a far more popular keyword on YouTube than ‘unboxing’.

Overall though, it seems like the interest in finance on YouTube is small by comparison with the content of the most popular creator on the platform (with a follower base multiple times bigger than the population of small countries) but given the breadth of content on YouTube, this is not small buttons as we found when we examined financial content creators in more detail.

The different angles that stand out from YouTube’s financial content are:

The sample of finance content creators on YouTube is largely male and there’s a recurring mention of what to do in your 20s, such as mistakes to avoid, how I was earning X by the age of 20-something. In fact, Financial Wolf discusses money management for teens.

The personal element to YouTube’s content is something that really stands out with videos frequently titled ‘how I’ or ‘I [verb]’.

In general, much of the finance content focuses on achieving financial status fast, hitting the ground running, and convenience (e.g. side hustles you can do from bed). There’s also a taste of the aspirational, big dreamer-type content that we saw on TikTok with advice on how to buy a Tesla, unboxing an invite-only credit card, how I went from $X to $X, etc.

Roaring Kitty, meanwhile, who recently appeared at the House’s Committee on Financial Services’ hearing over the part he played in the GameStop saga, wracks up hundreds of thousands of views for his commentary-style videos.

Some creators review, discuss or promote apps including:

A snapshot of financial YouTubers

YouTube is a place where people come to learn

For our word cloud analysis, we took a broader sample of titles of YouTube videos that returned from a keyword search for ‘finance’ and added them to the above pool for a total of 100+.

The terms that come to prominence are illustrative of the position of video in the spread of knowledge and information related to topical events (Ryan Cohen, decentralised finance) as well as more evergreen topics (money, personal finance, stock).

There’s a lot of content aimed towards education with content around book recommendations, information for beginners, financial freedom and financial advice.

YouTube seems to be for everyone. But one of the clear trends to emerge in this analysis is just how young people are starting to use it. In a few years, Ryan Kaji followers might turn to the likes of Financial Wolf for information on how to make financially prudent decisions as teens.

Given YouTube’s popularity, the volume of content, and its growth in advertising revenue, it seems like it’ll continue to be an important distribution source for knowledge in the coming years.

YouTube’s focus on independent content creators is reflective in the personal, ‘be like me’ type content that comes to the fore. But the shift to commercial content as well as YouTube’s algorithm means that ultimately, those it will reward will be those whose videos it thinks viewers will be most likely to watch.

Aoife Loy
Aoife is Lead Content Marketer at LEVERIS. She writes about our mission and approach to technological innovation.

A fully-integrated banking platform for better banking and smarter lending.

Insights on technology and how it is changing and banking landscape, straight to your inbox.

Some more articles on how technology is driving the digitisation of financial services and what that means for banks now and in the future.

Marcel van Oost, fintech commentator, early-stage investor and advisor took a break from his usual industry news sharing to give us the inside track on all things fintech.
Continue reading

SCV: How LEVERIS enables a 360-degree view of customers

Product Manager, Maria Killeen, explains how Single Customer View is both a feature and principle of the LEVERIS platform.
Continue reading

Banking in the shadows: The financial apps that Irish consumers are really using

As the Irish market looks set for significant change in the coming years, we carry out an analysis of the apps currently available across financial services to get an idea of the extent of customers’ shadow financial lives.
Continue reading

LEVERIS has announced its partnership with Marqeta, the global card issuing platform, to integrate its modern card capabilities within the LEVERIS digital banking platform.
Continue reading

From Libra to Diem: the story of Facebook’s cryptocurrency

As we leave Q1 of 2021 behind, Facebook's cryptocurrency has yet to make an appearance. We explore the story of how Libra became Diem to understand whether it'll ever emerge.
Continue reading

Design thinking and mastering the art of not getting stuck

Kateřina Pařízková, UX Designer at LEVERIS, explains the concept of design thinking and shares insights on the core stages of the process and tools used by the LEVERIS UXD team when developing new functionalities and redesigning existing complex ones.
Continue reading

Get the latest LEVERIS views on banking and technology straight to your inbox.